I know. I had the same question. I was living in Belfast for 2 years. Titanic museum was never on my list of “things to see” or “Belfast must-see”. It was just way too expensive for me. GBP 18 per adult, which is around EUR 21. For a museum? The British museum in London is free you know?

So I never visited this “World’s leading tourist attraction”. Even though I knew they had won a lot of awards. Something like the World Travel Awards/ Best museum in Europe or something.

Then I moved to Dublin. Then I saw this package tour Finn McCools is doing. A tour from Dublin, including entrance to the Titanic, plus the Giant’s Causeway and Dark Hedges.

So when I saw that this day trip includes the Titanic museum fee and Giant’s Causeway, I decided to give it a go. Also, I had to pick up some post from my old house in Belfast anyway. On this tour, I would have around 1 hour in Belfast, which is perfect. Belfast is so small I can just walk to my old house from the Belfast City Hall.

Anyway, so I went on this tour. Pick up from Parnell Square at 7:15am. Easy spot to find in Dublin. Good starting time as well.

I was planning to just sleep my way through to Belfast. It is, after all, two hours from Dublin to Belfast. But the guide started talking, telling us about the Troubles, the legends, St Patrick, Irish and British and this and that. I didn’t even realize it had been two hours. Time just flew.

Then we got to the Titanic museum. Or, as they call it, the Titanic experience. First impression? Hmm… this is kind of a weird design for a museum building… But then the guide told us it was actually built like this to resemble the shape of the Titanic’s prows. Suddenly it all makes sense and became artistically beautiful. They have the big word “Titanic” there in the front of the building as well. I think we took quite a few pictures outside the museum itself. 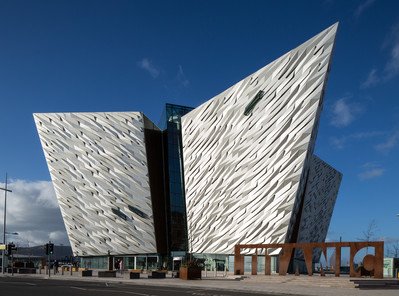 Going in, our guide gave us the ticket and gave us around 2 hours to explore. We followed the sign and started with the little history of Belfast. Turns out the Titanic experience is not just about the Titanic. There is so much more. It tells you how Belfast started with linen trade and production, then because of the harbour, they started the shipbuilding industry.

You will understand why this is voted one of the best museums in Europe. Instead of pictures and words on the wall telling you stuff, they have so many different types of interactive devices for you to play with. And it’s not the old stupid ones that you press a button and it lights up that kind of thing. It was really fun doing morse code, walking with the shadow in old Belfast city etc.

After Belfast history, you move onto the construction of the Titanic. They explain how much steel was used, how the structure of the ship was like. All the facts presented in the most un-boring way possible. Keep walking and you will be at the lift. Go up to the 3rd floor (or 2nd floor? just follow the sign). Here is where the fun begins.

They have a ride inside the museum! It’s called the Shipyard Ride. Of course it’s not one of those roller coaster rides in amusement park. But it was still fun! The thing moves up and down and turn etc, not just a cart running on the track. They show you how the working condition was like when they built the Titanic. Really interesting and we enjoyed it a lot.

Then the next part of the experience is about what was on the ship. How many sailors and waiting staff were on; how much food and drinks they had to load; how many posts and parcels were on board etc. A funny cartooned video shows you all these. They have also set up a replica of the 3rd-class, 2nd-class and 1st-class rooms there. I love the 270-degree video the most. It makes you feel like you are in the ship. They take you from the bottom engine room all the way up to the top deck. It is an amazing sensation I don’t know how to describe. Just go there and experience it. (Now I know why they call it the Titanic Experience).

Next, as expected, is the sink. It is heart-breaking. They dim the light in the room and show you the radio conversation between the Titanic and the nearby ship. It felt so real. I really love how they make use of the lights, the layout of the room, the sound and the words on the wall to make you feel like you are just in the control room of the nearby ship. Again, it suddenly makes all the sense why they call it an experience. It is way more than just a museum.

After reading some stories about a few individuals that were on the ship, you will walk into the room where they show you movies and books that people have made in all these years about the Titanic. It was a nice transition for my mood. It’s not making me happy again but I felt less sad.

Next is the big cinema-like room where they show you on the gigantic screen what is there on the seabed today. The Titanic museum was huge. I find this room a good break for us to sit down and rest a bit, while still learning a bit more about the ship. Didn’t see the Ocean of the Heart though…

To conclude, it was a really nice experience. I am really glad I went. Now if you ask me again, I think the GBP 18 is worth it. And of course, if you can find this Titanic deal from Dublin that Finn McCools Tours is currently offering, you should really really do it! I think they are just doing it this cheap because it is a new tour at the moment.

[Part 2 about the Giant’s Causeway, Dark Hedges and Belfast – to be continued]

—
*The views and opinions expressed in this article are those of the authors and do not necessarily reflect the views or opinions of Finn McCools Tours.