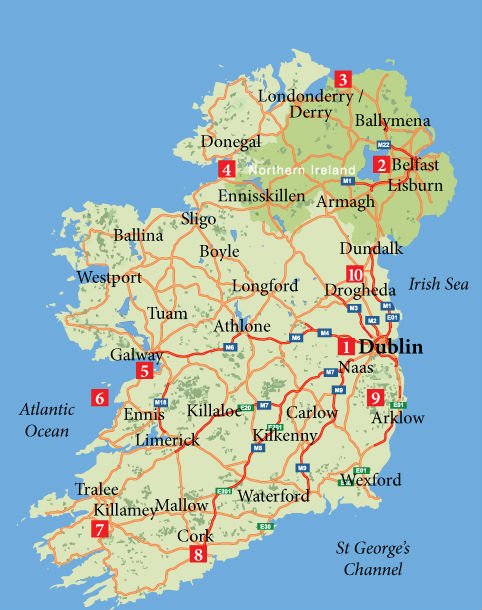 Ireland (from the Irish, Éire) is proud and humbled, cultured and fragmented, remembered fondly and longed-for. In its 10,000 years it has been traditional and modern, romanticised and deconstructed, built-up and blown apart. It dazzles from plane windows like that of the green light on New York’s “East Egg,” inspiring poets and tourists alike, and it lives within the mind as vividly as it does without. How many places can you say that about?

The island of Éire has always included a differing mix of people. Kerry, one of its oldest areas, means “people of Ciar” for the pre-Gaelic tribe alleged to have firstly inhabited the land, and in turn denotes a dark complexion. Although they have been somewhat relegated to Irish mythology, while the Irish people are widely assumed to have descended from the Keltoi in central Europe, modern research has traced Ireland’s ancestors, astonishingly, to the north of Spain.

Today, the difference is also cultural. A sweeping range of foreign cultures have set up shop here, never more intensely than in the past ten years. But the most strikingly obvious cultural divide is that of the English and Irish, Protestant and Catholic, North and South. This goes way back to the Norman’s Invasion of Ireland during the 12th century, who in turn helped prepare a string of invasions that would completely upturn and reform the lay of the land. Great swathes of land were claimed, people displaced and kings and kingdoms vanquished to history. This period of social revolution in increments culminated with King Henry VIII in Ireland, who crowned himself King of Ireland in 1542.

During the 17th century, wealthy English and Scottish landowners began to systematically colonise the north of Ireland in what is known as the Plantation of Ulster, prompting a sea change in political attitudes and altering the fabric of Irish society from an older Catholic ruling class to a chiefly Protestant one. Bitterness and angst for the English invaders became ever more entrenched; slowly but surely, the Irish resistance was brewing. A few Irishmen closely bound to their country and to their principles met in secret, the air of revolution in the very breath they breathed, and in 1798 a rebellion was launched with the help of the French. But it was quickly stamped-out.

The 1800 Acts of Union finally brought Ireland into unity with Great Britain. Irish Nationalism, silent for so many years, found its voice in Daniel O’Connell, a Member of Parliament for Ennis who delivered Catholics from political discrimination with his Roman Catholic Relief Act of 1829. But not until early in the 20th century, when a grassroots campaign against British occupation led to the establishment of Home Rule, were Catholics able to bolster their cause for Irish independence. Northern Ireland since then has contained much of the resulting violence. The Republic of Ireland, meanwhile, has worked to establish itself independently. After a period of intense regeneration, both have arrived in a much better place and time.

Despite its troubled history, Ireland is first and foremost a place of great classical beauty and proud, outgoing people. From the Giant’s Causeway to the Burren, the beaches of Donegal to Galway Bay, Ireland’s unique and unusual beauty represents something of an ideal, one that millions of tourists each year go in search of. And it can be found. You simply need to know where.