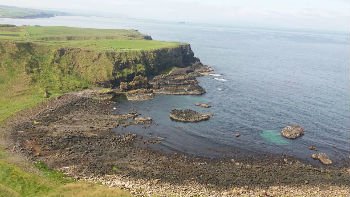 Last Tuesday I took the Game of Thrones location tour. The trip started at 7am and the bus began to drive us to the first stop of the day; Belfast. After about 2 hours we arrived and had 40 mins time to explore the City a little and also get some snacks and drinks for the day or just have a little coffee to become awake. Then the bus driver took us to the Dark Hedges, which is a beautiful lane of beech trees. Our guide Ellen also told us that there were some scenes filmed for GoT and also some facts about the place itself. We had 15 minutes time to take pictures and enjoy this absolutely amazing nature here. Then we got in the bus again and got on the way to Dunluce Castle, where we made a little Photo Stop which was absolutely worth it – We had a stunning view! 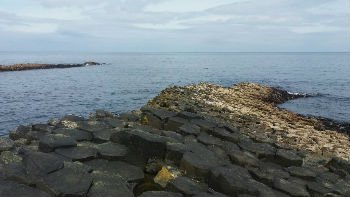 The next Stop was the Giant’s Causeway. Our guide told us some fun facts about the myths and some other story’s about how this sight might have been created. We had an 1h 30 min to explore this wonderful attraction and then the driver brought us to the Larrybane where several scenes in Renly’s Camp got filmed. After that we went on to the beautiful Ballintoy Harbour. Our guide Ellen explained that in this location were also some scenes for the series filmed. And then our next stop brought us to Kingsroad, which was the set for Arya’s escape in G. Then on our way back home we made stops at the pretty little village called the Cushendun and went into the Caves, where Ellen explained all about the filming here of the scene where Melisandre gave birth to the shadow assassin and even showed us videos of it. Then it was time to go and we went to our last stop in Belfast again and had a little look at the Glens if Antrim and had time to go around and stretch our legs. It was a really great day and I had an awesome time. 10/10 would recommend, A must-do for any Game of Thrones fan!